In late 1985 Disney signed a deal with the French government to build a new Disney theme park in Marne-la-Vallée, France. Planning for the park started in 1984 with multiple locations being considered, including spot in Spain. This Euro Disneyland Announcement Brochure From 1986 was the first brochure released by Disney announcing the development of the park. What's most interesting is seeing how many changes occurred between the time this pamphlet was produced in 1986 and when the park opened in 1992. 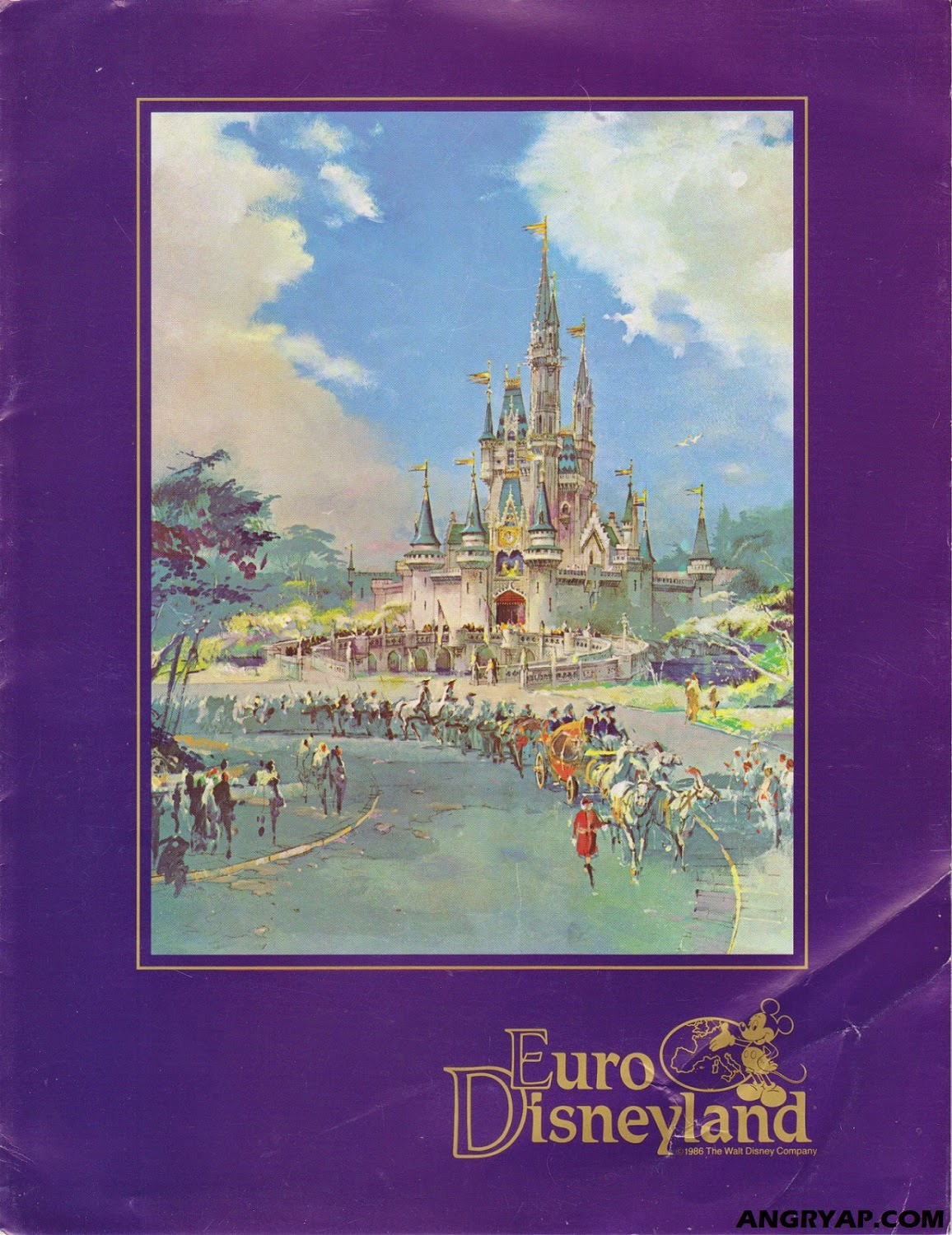 The cover features Herb Ryman's iconic painting of Walt Disney World's Cinderella Castle from 1967. Also seen at the bottom is a simple and obviously temporary logo for the park. In this brochure you'll see there is zero original art for Euro Disneyland, only art reused from Disneyland, Walt Disney World, and Tokyo Disneyland. My guess is that Disney either had no art ready to release to the public (remember, this is less than a year after a location had been selected). 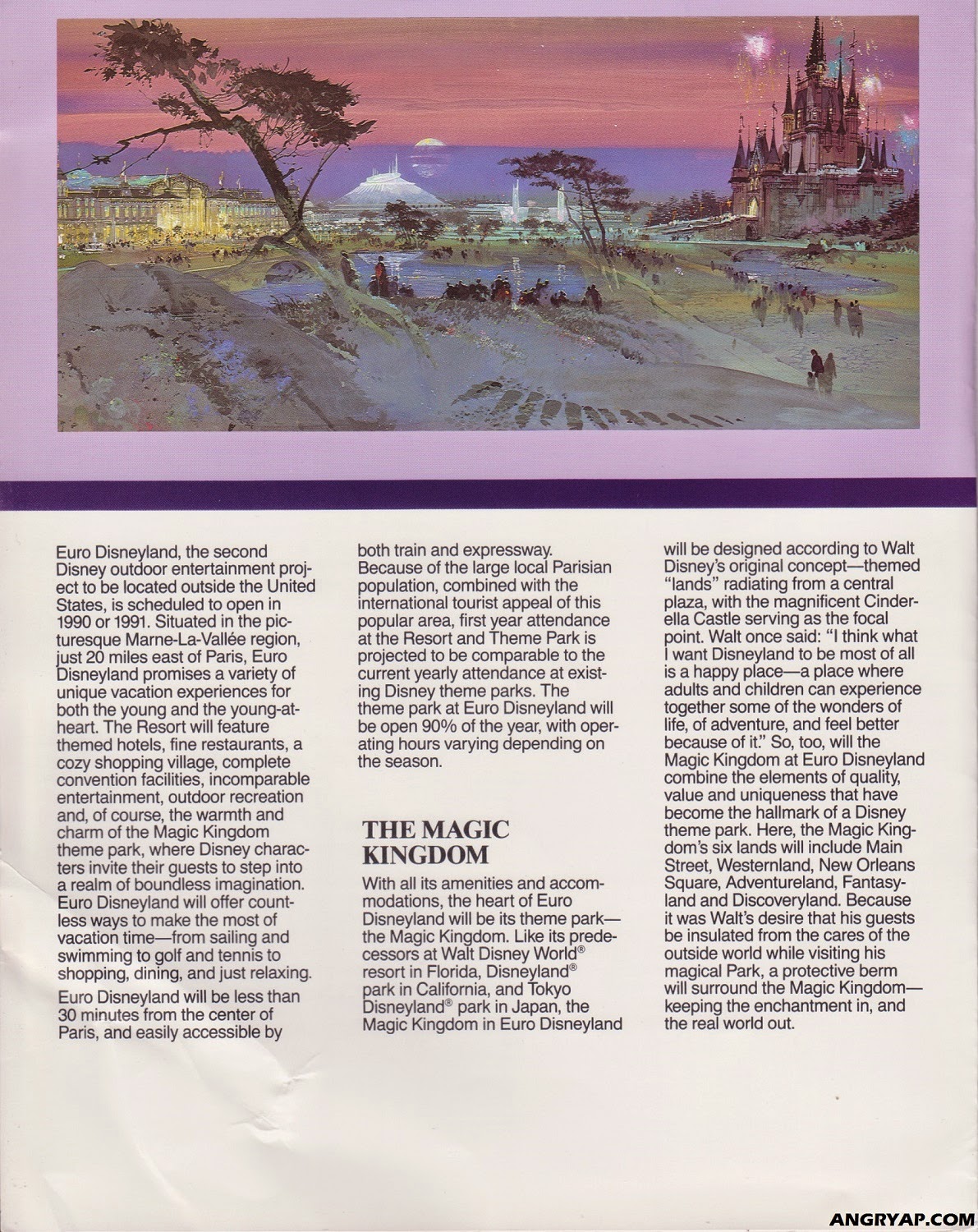 The top of the page features another one of Herbert Ryman's incredible paintings, this one being Tokyo Disneyland's central plaza. The text below promises the usual Disney amenities like shopping, recreational activities, and a Magic Kingdom-style theme park. 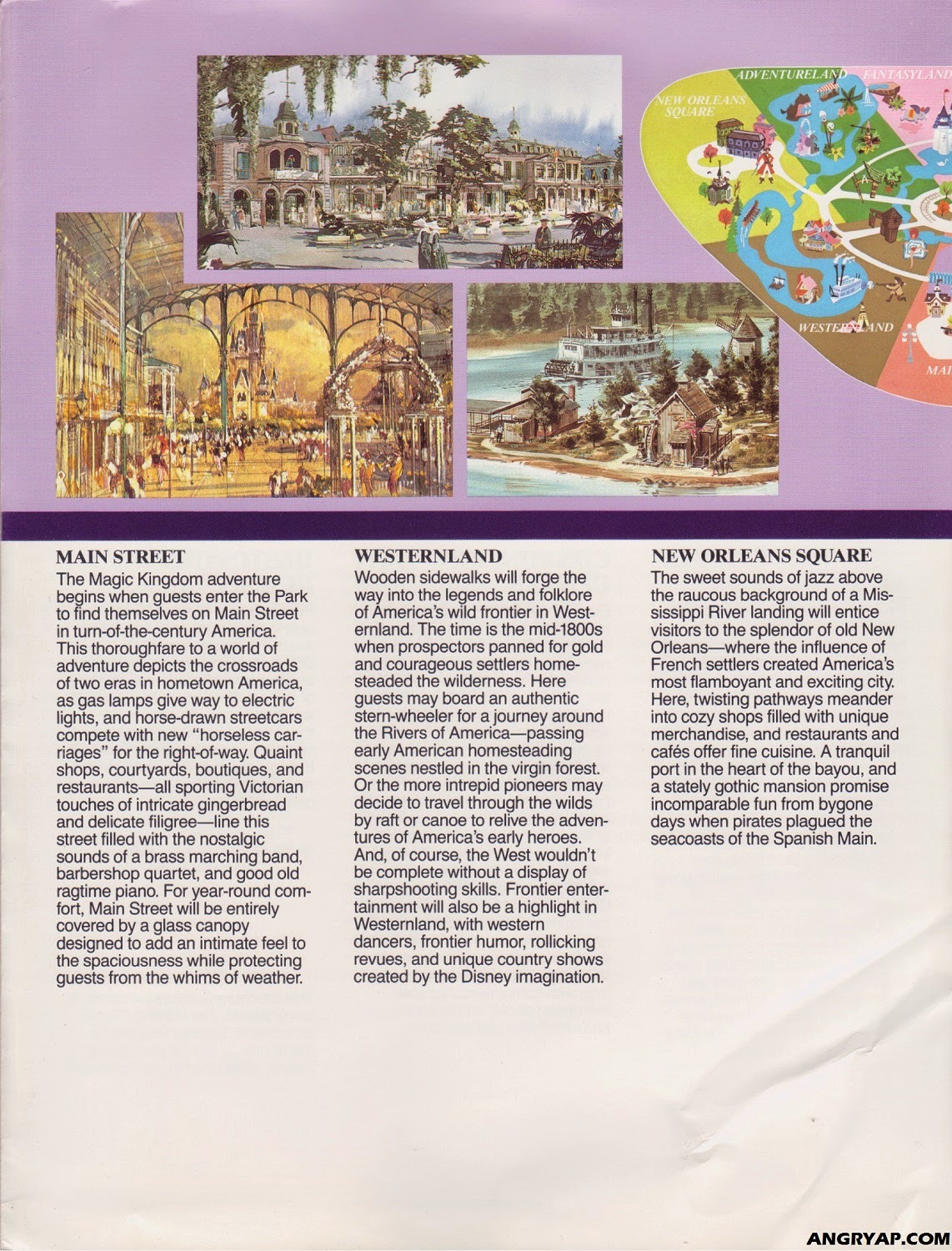 Even more Tokyo Disneyland art is at the top of this page with World Bazaar, the New Orleans section of Adventureland, and Rivers of America. Here you can see that at one point they were planning to have Main Street covered in a glass canopy, exactly like Tokyo Disneyland. Tony Baxter has said in interviews that the canopy would have been too expensive and he preferred to use the money elsewhere. As you can see in the paragraph on the right, New Orleans Square was once a planned land for Euro Disneyland. I've never read anything to indicate that New Orleans Square got past the early stages of planning. To this day most of the land where it was supposed to go sits sparsly populated with vegetation and a few buildings. This area of the park has been rumored for years to be home to the still unbuilt Splash Mountain. 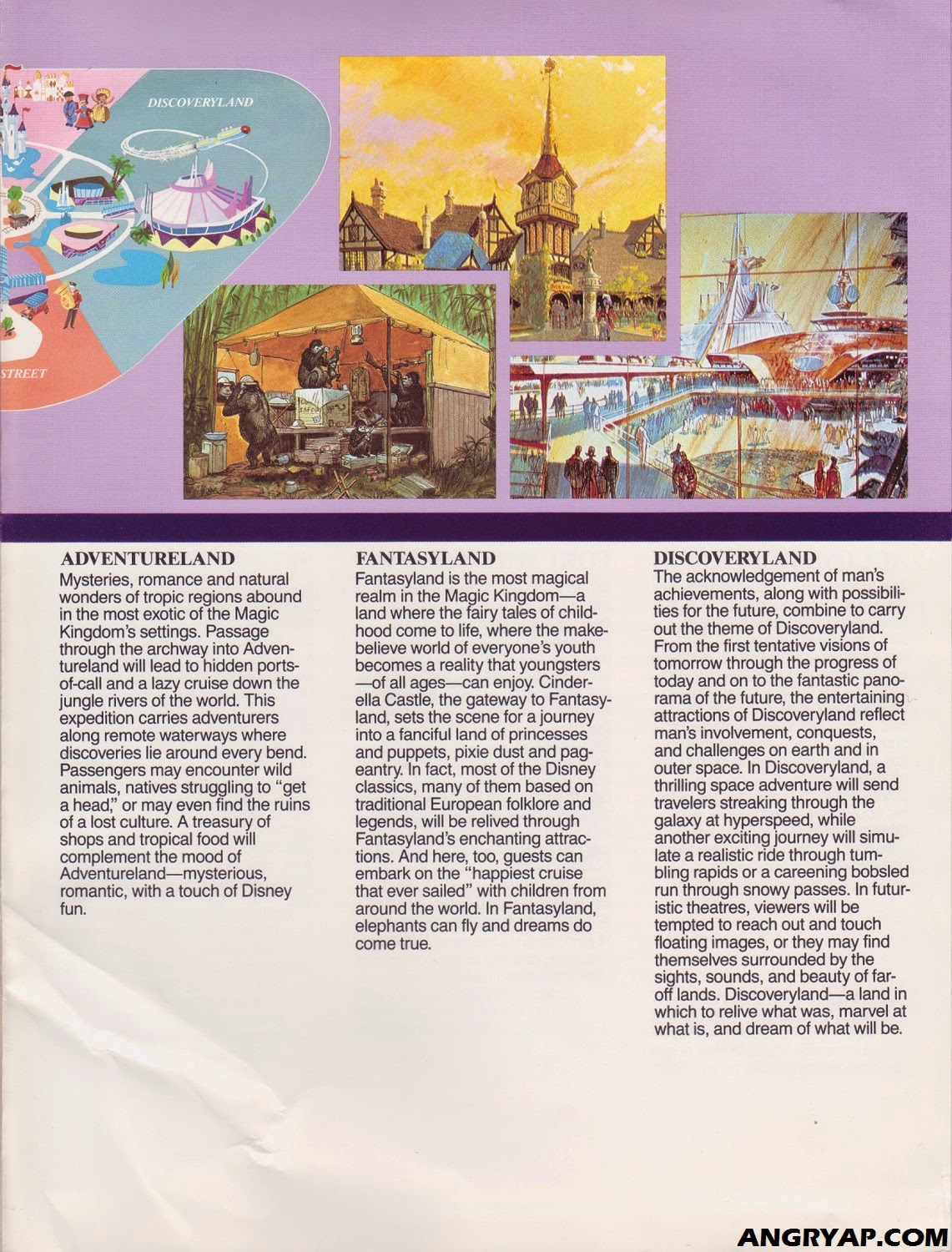 Here we see some art Jungle Cruise, Disneyland New Fantasyland from 1983, and Disneyland Tomorrowland art from the early 60s. The Adventureland and Fantasyland descriptions make them sound identical to their American and Tokyo counterparts. However Discoveryland sounds very different than what ended up getting built in the park. It sounds like the Imagineers had not yet implemented the Jules Verne retro-future Discoveryland and instead were originally planning a more traditional Tomorrowland. A bit of text I wanted to point out here is the sentence describing an unbuilt ride with "a realistic ride through tumbling rapids or a careening bobsled run through snowy passes." 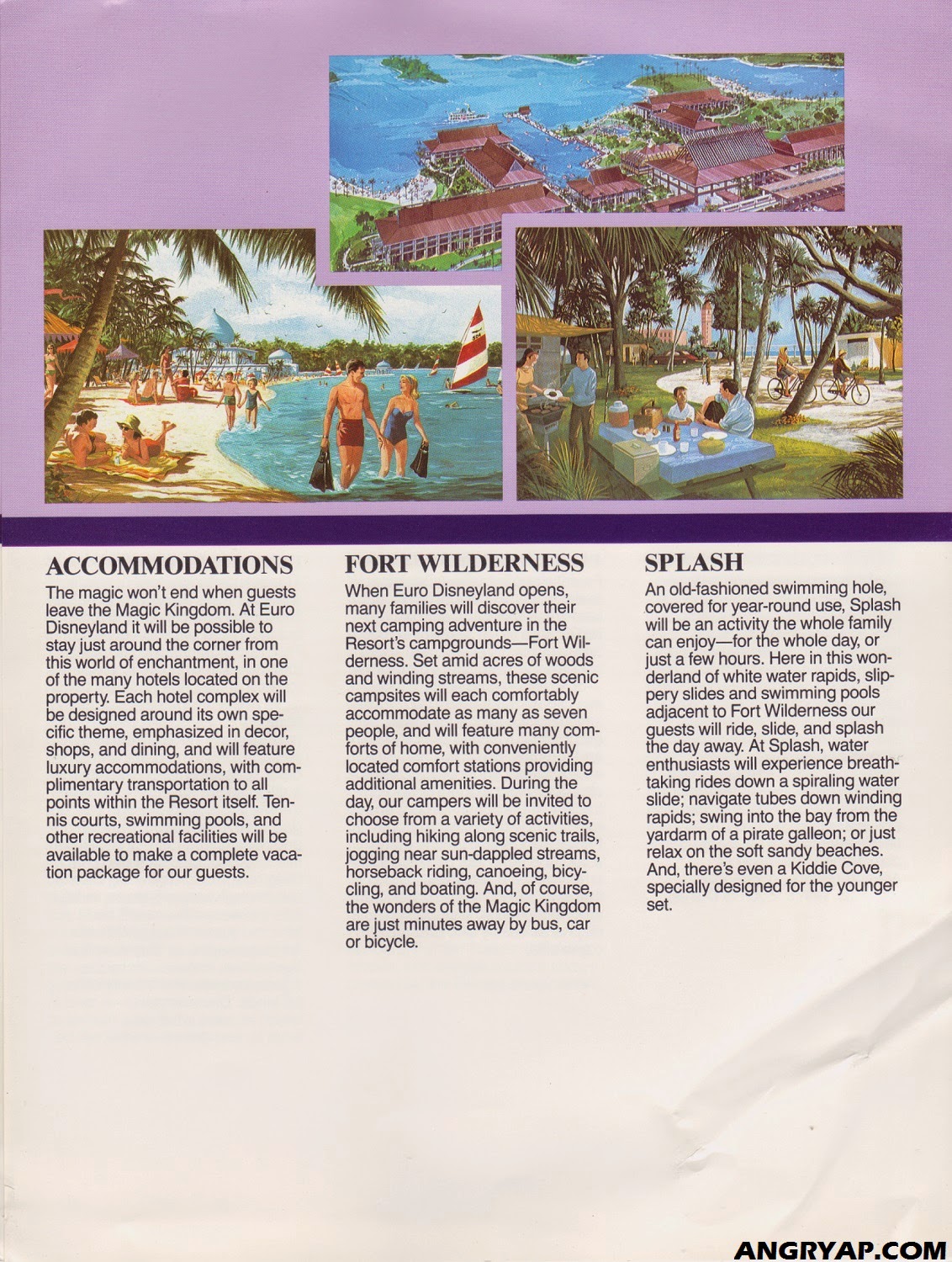 The three paintings at the top of this page represent the different resort hotels Euro Disneyland would offer upon completion. The image on the right is of the Persian Resort, a hotel planned but never built at Walt Disney World. The top image shows WDW's Polynesian Village Resort, while the one on the right is art for yet another unbuilt WDW hotel, the Venetian Resort. I've asked a few Euro Disney experts I know and they told me none of these resorts were ever actually planned for the park. The second text column mentions Fort Wilderness, which ended up being called Disney's Davy Crockett Ranch. The camping aspect never came to be, but some of the recreational activities are still offered today. In the third column you can see a water park that was planned called "Splash," which sounds like Walt Disney World's River Country, but with a cover. This also was never built. 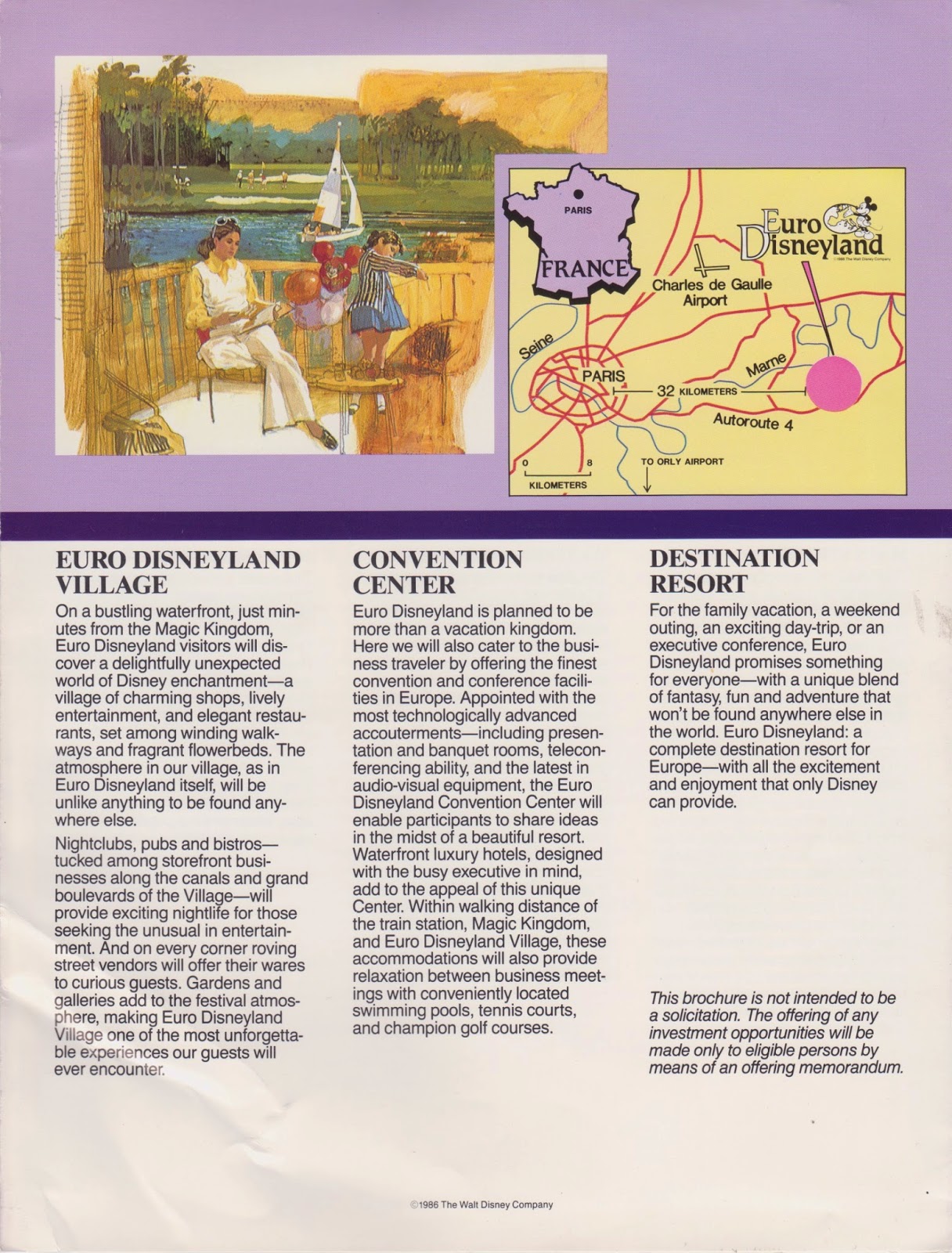 I hope you enjoy this look at the early stages of Euro Disneyland. It's interesting that this brochure makes it look like the park was going to be very similar to Tokyo Disneyland, with the addition of Walt Disney World-style resort hotels. Let me know your thoughts in the comments below.